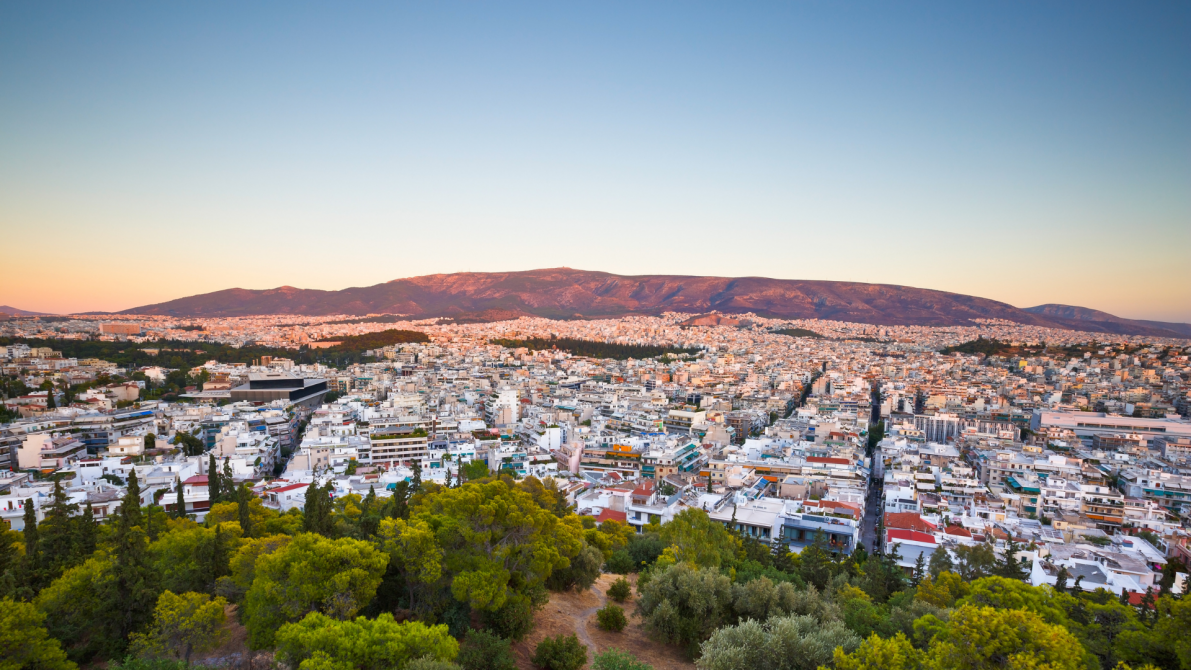 Athens is often referred to as a city of striking contrasts, ancient and modern, to the extent one could say they clash. The emblematic image associated with Athens is the famous hill known as the Acropolis, where the remains of the Parthenon stand out. Surrounding the Acropolis from every direction, there is another less celebrated characteristic of Athens (and indeed, of most Greek cities and large towns): a cluttered maze of large, boxy buildings known as the polykatoikia, which means condominium or “multi-residence” translated literally from Greek.

The polykatoikia, or polykatoikies in plural form, became a signature feature of Athens owing to the city’s tumultuous development from being smallish and modestly populated to a bustling megalopolis in the last century. Their construction goes hand in hand with understanding modern Athenian and Greek culture, as well as envisioning the future of the city.

The cityscape created by the polykatoikia has often been dismissed as dreary, crowded, monotonous, and lacking in charm and character. In recent years however, there has been a strong reappraisal of the polykatoikia by architects and urban planners, both locally and abroad. Today, designers and social scientists ask us to view polykatoikia-strewn Athens on its own terms, the good with the bad, the beautiful with the ugly – or perhaps beautifully ugly – rather than merely to compare it disfavorably to the more stately or picturesque architecture of other famous European cities.

Despite the typical Athenian polykatoikia’s beauty not being immediate, it offers other valuable gifts for urban living. What makes it particularly interesting is this effect was largely accidental and unexpected. The phenomenon of the Greek polykatoikia draws a lot of interest in developing countries in particular, because the structure and usage of these buildings led to two important effects:

There are several periods during the last century where polykatoikies had boomed. The last and largest of these, following WWII and the Greek civil war, had little involvement from architects and urban planners. While the architectural philosophy behind the polykatoikia was not in and of itself ugly, in practice the limited involvement by professionals with a trained eye and knowhow for aesthetics, along with a constant prioritization of maximizing space, led to these masses of clunky buildings that are often considered the sore spot of Athens. Yet it is likely that top-down urban design with a lot of forethought could not have achieved the positive effects on the city that these buildings contributed to. What happened by accident in Athens could perhaps be replicated with more intention in developing cities.

The fundamental reason the polykatoikia proliferated was to accommodate Athens’ rather abrupt population growth in several spurts last century, and it did so via a governmental housing policy known as antiparochi, for which there is no precise translation in any other language. In very basic terms, this policy allowed builders and aspiring homeowners to bypass complicated land purchases and housing-related taxation in order to focus most of their budget on construction costs.

It is important to note that although polykatoikies were constructed in an informal, low-cost way, mainly by non-professionals, the buildings themselves are of considerably high and sturdy construction quality, in no small part due to plentiful and affordable access to concrete, a large local industry of Greece. Furthermore, as the antiparochi system essentially required a reciprocal collaboration between builder and homeowner – and often they were even one and the same – there was a natural commitment to creating safe and comfortable residences.

Yet it cannot be denied that today these buildings are aging. In human terms, the youngest ones are mostly from the 1980s; middle-aged by now. This means they require both structural renovation, as well as an updated design approach aligned with contemporary lifestyles. Some of the renovation projects envisioned by architects, interior designers, and urban planners are very directional and even visionary in scope, and it is exciting to imagine how their ideas might change our lives.

However, there are often relatively accessible changes that can be made to the polykatoikia that could greatly improve the residents’ quality of life. For example, the polykatoikia is typically an unsuitable choice to spend the Mediterranean summer, in particular its hot and sunny days, all the more compared to traditional houses in the region. A structural renovation could explore various ways of improving the airflow as well as the integration of features and materials with cooling effects, always mindful of sustainable methods, which in turn will help nature do its own part in maintaining cooler temperatures.

Heating in the winter is also a rather new but now ongoing challenge of the polykatoikia. These modern buildings were once considered to have state-of-the-art heating systems, but during and since Greece’s financial crisis, most of them are now outdated, and their maintenance has become an extra burden. Needless to say, this has led to many conflicts and problems for residents of polykatoikies, where many decisions about utilities must be made on the group level. There is a vital need for renovation projects to make homes, offices and other workspaces in the polykatoikia sufficiently warm in safe, affordable, and environmentally friendly ways.

Various changes are also commonly needed to the apartments’ interiors. The kitchen, typically small and often without much natural light in polykatoikies, does not match today’s needs, since people enjoy making the kitchen a more central, social area of their home. Other examples include turning bathtubs into showers to maximize space in frequently small, narrow bathrooms, and creating additional bedrooms from large living rooms, once designed to entertain visitors in a rather formal way.

On the other hand, where structurally possible, tearing down and repositioning walls and entrances to allow for a more expansive space is also preferred. New homeowners and investors have also shown great interest in creating more communal areas, like shared rooftop gardens and courtyards, which add valuable dimensions to living in a modern big city.

The polykatoikia has been unfairly maligned on one hand, but on the other it is not without faults. It bestowed many gifts to the city of Athens, allowing families to build and own their own homes at an affordable cost. Its construction strengthened and supported the middle class, which is generally perceived as an indicator of a healthy society, and it had a flexible design that allowed for people from various walks of life to reside and work in the same building. This led to vibrant and safe neighborhoods, largely avoiding the development of marginalized, impoverished parts of the city.

The bulk of polykatoikies today require structural renovation and an updated lifestyle-oriented design, a timely opportunity to rectify mistakes of the past. And as before, the inherently flexible design of the polykatoikia is accommodating in allowing us to realize our dreams about how we want to live.

Learn more about the characteristics of each Athenian Neighborhood here.