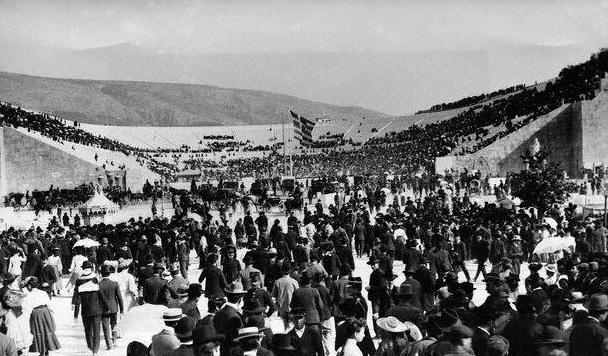 A fascinating picture featuring in this week’s MI4 Days of Future Past blog, the seventh one in the series, takes us back more than 120 years ago. We travel back to 1896, during the global re-launch of the Olympic Games in their birthplace, the place where they originated: Greece.

The Panathenaic Stadium in Athens, Greece, pictured here in 1896 during the arrival of spectators reaching the stadium to watch the games, is also known as ‘Kallimarmaro’ literally translating to ‘beautiful marble’. The stadium is truly unique globally, as it is the only stadium in the world that has been built entirely of marble. The Panathenaic Stadium holds a history as rich as the millennia-old city of Athens, in which it proudly sits.

The original stadium was built on the site of a ravine, between the hills of Agra and Ardittos, south of the river of Ilissos and over a race course (which had been present there since the 6th Century B.C.) for the purpose of hosting the Panathenaic Games, also known as the ‘Great Panathenaea’. This was both an athletic and a religious festival held every 4 years, in honour of the goddess Athena, protector of the city of Athens. The stadium was built by the Athenian statesman Lykourgos, as early as 330 B.C using limestone from the island of Poros in the Saronic Gulf. Located in the area now known as the Athenian district of Pagrati, the stadium has been witness to the city’s transformation through the aeons.

To the east of the National Gardens, the Zappeion Exhibition Hall as well as the famous Syntagma Square and the Parliament, the stadium was also historically strategically positioned close to the spring of Kallirhoe, the sanctuary of a local hero called Pankrates (hence the modern name of the area, ‘Pagrati’) and the Cynosarges public Gymnasium, all historical sites with great significance for Athenians and all Greeks alike. The river Ilissos used to run right in front of the stadium since the ancient times, though it has now been flowing underneath Vassileos Konstantinou Avenue in front of the stadium.

The Panathenaic Stadium was rebuilt in Pentelic marble (originating from Mount Penteli overlooking Athens – the same marble used to build the Parthenon and many other historical sites) by Herodes Atticus, an Athenian Roman senator and avid admirer of the Greek classical culture, by 144 AD. It had a capacity of 50,000 seats, and was a grand project of the era, an attempt to ‘unite’ and fuse elements of Classical Greece and the newer, often contrasting Roman culture that was prevailing at the time. Though Greeks typically used their stadiums for cultural and athletic events, Romans also used similar sites largely for populist events such as Gladiators fights. After the rise of Christianity in the 4th century and the consequent ban of bloody sporting events by Roman Emperor Theodosius I, the stadium was largely abandoned.

Excavated and revealed again almost 15 centuries later, in 1869, it was fully refurbished and hosted the opening and closing ceremonies of the first modern Olympics in 1896. During the event, the stadium was the official venue for 4 out of the 9 Olympic sports.  The 20th century saw the Stadium used for various purposes, serving as a meeting and congregation point for Athenians throughout. It was once again used as an Olympic venue in 2004, it still is the venue in Greece where the Olympic flame handover ceremony to the host nation resides, while it also still serves as the finishing point for the annual Athens Classic Marathon.

The surrounding area of Pagrati is now at the top of property investment choices in the Greek capital. At walking distance to most historical and contemporary sites worth visiting in the Athenian capital, the area has seen a rise in rental prices as well as a surge in investor interest in recent years, with the trend constantly increasing.  Also known as a cultural, artistic and intellectual hub, Pagrati is home to many respectable and adored restaurants, bars, galleries and coffee-shops. Neighbouring areas of Mets, Koukaki, Akropoli and Plaka, as well as the areas of Neos Kosmos, Ilissia and Kolonaki further away, are also currently property investment hotspots, forming the new boundaries of what seems to be the ever-evolving and expanding contemporary Athenian centre.

As the main contact and the true one-stop-shop for all things property-related in Greece, MI4 Real Estate Brokerage can offer a wide and diversified portfolio of properties around the Panathenaic Stadium, the area of Pagrati, as well as all the neighbouring areas described above, and many more throughout Athens and the whole of Greece.

Our team of expert real estate professionals can cover everything from investment opportunities to Golden Visa-related queries, or both. All you need to do is contact us and we will take care of everything from there onwards.