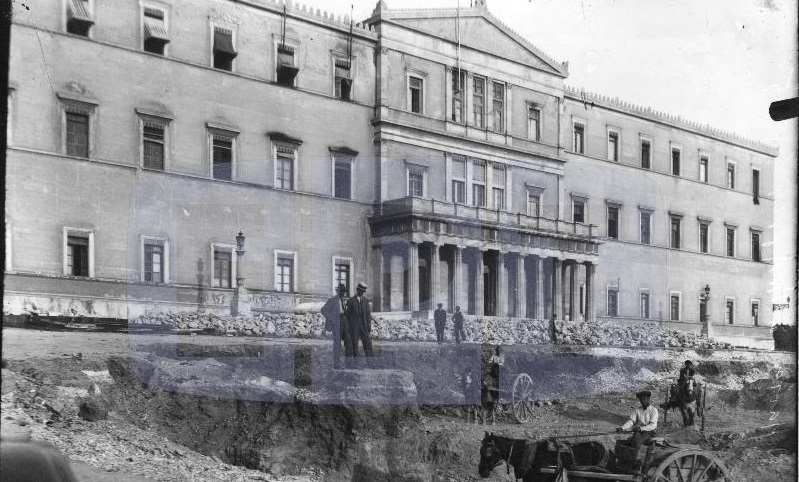 The building depicted on this week’s MI4 Real Estate ‘Days of Future Past’ Blog Series was originally built to serve as the royal residence. Hence, it is often still being referred to as ‘the Old Royal Palace’ by locals.  Completed in 1843, it was originally the first royal palace of the modern Hellenic state and has served as the house of the Hellenic Parliament since 1934. The historical picture was reportedly taken in 1900, and depicts refurbishment works performed at the front of the building in 1900.

The ‘Old Royal Palace’ or Hellenic Parliament, whichever term is more to your liking, is still one of the most impressive Athenian landmarks, holding great cultural, historical and architectural significance.

It was designed by the architect Friedrich von Gärtner, of Bavarian origin, for King Otto and Queen Amalia of Greece. Funds were supplied by King Otto’s father, King Ludwig I of Bavaria. The ‘Old Royal Palace’ or Hellenic Parliament, whichever term is more to your liking, is still one of the most impressive Athenian landmarks, holding great cultural, historical and architectural significance.

Initial suggestions for its building location included the area now known as ‘Omonia Square’, the neighbourhood of ‘Kerameikos’, and even on top of the the Acropolis of Athens! The building was finally erected where it still sits today, on central Amalias Street, at the heart of the City of Athens, facing Syntagma Square and the busy shopping district of Ermou Street leading down towards the historically and culturally rich neighbourhoods of ‘Monastiraki’, ‘Psyrri’ and ‘Thiseion’, while bordering with the city’s uniquely beautiful National Gardens.

The latter were said to be Queen Amalia’s passion, being an avid gardening enthusiast. The building continued to serve as a royal residence until 1924 when a referendum abolished the monarchy. Following that, it was used for many different purposes, housing several government and public services in the 1920s, as a makeshift hospital during World War II, a shelter for Greek refugees coming in from Asia Minor in 1922, and more.  In the November of 1929, it was decided that the building would permanently house the Hellenic Parliament.

Following intensive renovation, the Senate convened in the Old Royal Palace on August 2nd 1934 for the first time. Although the monarchy was gradually restored that same year (only to be abolished again more than 35 years later), the building retained its role as the House of Parliament until the present day. The location is now a central tourist as well as a locals meeting hub, adjoining affluent and exclusive as well as historical and picturesque areas like ‘Kolonaki’ and ‘Plaka’ to each of its sides. It is served by the central Syntagma Square metro station, offering excellent road and public transport connections to all central Athenian and suburban locations, as well as the airport and main ports.

MI4 Real Estate Brokerage takes pride in the extensive, rich and diverse property investment portfolio it can offer to its clients. The areas surrounding the ‘Old Royal Palace’ have seen a tremendous rise in property investor interest, and value in recent months. Asking prices are however still competitive.

Contact us now whether you would like to make a solid investment in one of the most beautiful holiday destinations in the world, or you are seeking to secure a Greek/EU residency status through the Greek Golden Visa program by investing a minimum of 250,000€ on property (or properties) anywhere in Greece.