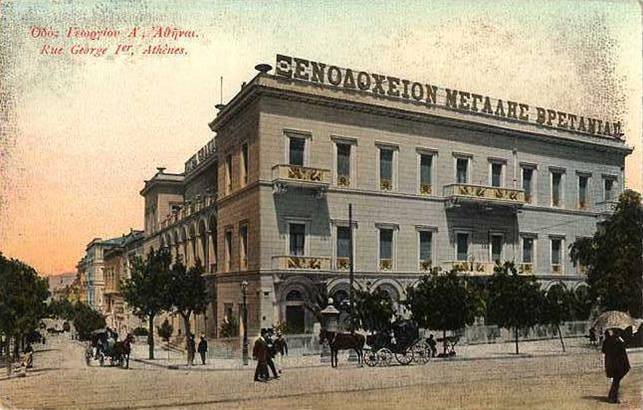 This week’s Days of Future Past blog article will bring the spotlight on an Athenian favourite: the Hotel Grande Bretagne, pictured here in 1874, and again in the present day. One of the most historical buildings in Athens, the Hotel Grande Bretagne is a true architectural artefact right in the centre of the Hellenic capital, Athens. It sits on Syntagma Square, almost next the Hellenic Parliament itself.  An exclusive luxury hotel, this establishment has served the public for 140 years.

The original building was constructed only 12 years after Greece re-gained its independence, in 1842. It was the house of Antonis Dimitriou, a prosperous businessman from the island of Limnos. A gentleman called Efstathios Lampsas bought it in 1874 and restored it after taking a loan of 800,000 drachmas. It was he who renamed it ‘Grande Bretagne’. The hotel was connected to the electric grid on 1888. A new wing was built on Panepistimiou Street in 1930 and another on Voukourestiou Street in 1950. It was in 1957 that the original mansion, the one Antonis Dimitriou had built in 1842, was demolished making room for yet another new wing.  Kostas Voutsinas, the architect that undertook the task, made an effort to preserve the style of the original building.

Serving as the base for the Greek National Headquarters during the Greco-Italian War and the Battle of Greece in 1940–41, it was also used by rival forces during the occupation of Greece. It was the Hotel Grande Bretagne that British forces also chose to house their headquarters when the war ended in 1944.

The glory and reconnaissance that the hotel enjoyed historically has been followed through all the way to the present. The Hotel Grande Bretagne underwent a substantial and costly renovation in 2003, which totalled a whopping 112,000,000€, in a successful effort to restore it to its former glory. The hotel now offers 320 rooms and suites, including an impressive 400sqm (4,305 sqf) luxury suite on its 5th floor.

Syntagma Square borders with the exclusive affluent area of Kolonaki and the historical district of Plaka.  Due to its strategic position and its importance, both historically and commercially since it is the central hub for all Athenian visitors and residents alike, the area has seen a substantial upsurge in property value, especially since the recent large increase in tourist numbers visiting Athens throughout the year.

The international investor appeal that the area has enjoyed is a good marker for what is to follow. MI4 Real Estate Brokerage is your prime contact in order to be informed about lucrative properties on offer and enjoy a look at our impressive portfolio. We have focused on acquiring a number of notable properties in the wider area where the Grande Bretagne Hotel is located, and our expert team is ready to answer your every query.