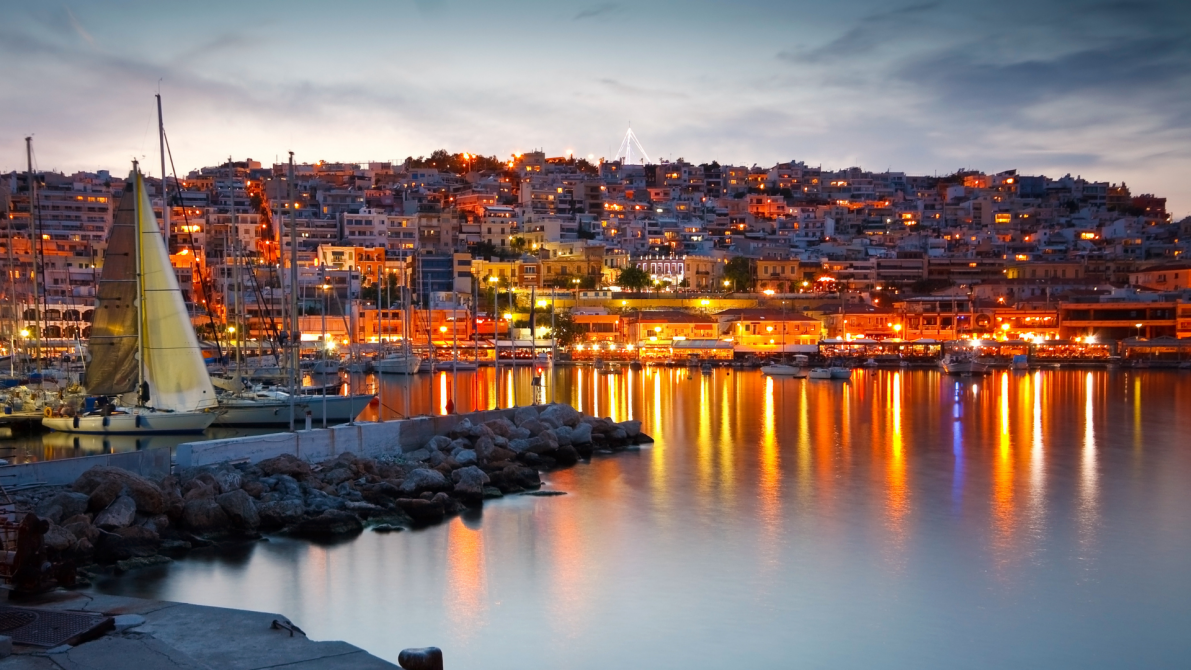 Piraeus, Athens – The Great Port City of the South

I had been depressed and worried. But from the moment of landing at Piraeus life renewed itself in perpetual interest and delight.

In antiquity, the center of Athens was directly connected to the southwest port city of Piraeus by magnificent defensive walls, formally known as the Long Walls, long lost to history.

In the 21st century, a modern reconnection is emerging with the introduction of several new modes of fast and easy transportation, in particular new metro stations serving the area and connecting directly to the airport. Yet as this interconnection grows, Piraeus still very much feels like its own city, with its own distinctive culture and vibe.

Piraeus retains the character of a true port city, with all the attendant charms as well as negative stereotypes that go along with it. It is bustling with maritime-oriented activity and has an overall gritty, industrial feel.  It did not escape bombardment during WWII, just one of the ways Piraeus deviates from neighboring Athens and carries a palpably different aura.

At the same time, Piraeus also has plentiful scenic and beautiful sights in its neighborhoods, hills looking out to the sea, and beaches.  Renovation of the port – where all of the characteristic and unique elements of Piraeus ultimately converge – is currently underway at a fast pace, with the aiming to make it more accessible and enjoyable to pedestrians. The concentrated development along the southern Athenian coastline has already proved a boon for the city, attracting great interest among real estate developers, property investors, and Greeks looking to rent or purchase a home.

The first positive signs of the city’s transformation via investment were evident from the cluster of contemporary art galleries opened by young, cosmopolitan curators, who intentionally chose Piraeus over more established art hubs in Athens and abroad. Another artistic project is the forthcoming museum of antiquities retrieved from the depths of the sea, one of the very few museums in the world dedicated to these wondrous artifacts.

Taking advantage of its location right on the harbor, the museum itself has been ambitiously designed to feature underwater construction for visitors to peer out at the sea they are submerged in. These exciting cultural developments will no doubt greatly increase the number of visitors and residents in Piraeus, and luckily the city is well-prepared to welcome and accommodate bigger crowds.

As one of the largest passenger ports in the world, not to mention home to two large universities, Piraeus has long devised ways to accommodate the constant influx of large groups of people. An important one is its innovative and efficient round-the-clock garbage management system, a necessity due to the enormous volumes of waste generated by the commercial and passenger port, in addition to the residents who call the city home.

Piraeus has also been home to an architectural peculiarity for almost 50 years now, an imposing building right by the port known as the Tower. As the second tallest building in a country with generally low-slung architecture, it already stands out; what makes the structure truly peculiar is its expansive space, comprised of 24 floors, which has never been occupied apart from the lowest three floors.

The Piraeus Tower is yet another part of the city undergoing a dramatic transformation, in this case, due to a €26 million investment. The entire building is projected to be fully operational by 2024, renovated with cutting-edge sustainable design and comprised of modern offices, retail, restaurants, and a luxury hotel. There is a strong expectation this project will spark further investment in the many underutilized or even abandoned buildings of Piraeus.

In anticipation of increased traffic, construction for three new metro stations serving the area is well underway. Among these, the port will be conveniently connected directly to the airport by a 1-hour ride. Funding has also recently been approved to upgrade and speed up the electric railway line connecting Piraeus to the northern suburbs and center of Athens, and there are plans for an additional railway line within Piraeus in order to ease traffic to the port.

All the areas adjacent to the forthcoming stations and resurfaced, expanded roads have seen a huge spike in interest for real estate investment in both housing as well as commercial properties. Foreign investors have already bought and renovated old houses, and successfully resold them.

Residential and commercial properties throughout Piraeus requiring intensive renovation can be found at very attractive prices. The city is still affordable, with for example the cost per square meter not exceeding €1400 for independent, functional but abandoned buildings close to the port.

A major maritime and shipping industry center today, Piraeus’ identity built around sea travel stretches all the way back to antiquity. Home to one of the largest passenger ports in Europe, the city welcomes millions of visitors annually on their way to the Aegean islands. Locals of Piraeus have always cherished their city, so distinct from Athens despite the proximity of the two cities. With a multitude of new projects transforming Piraeus, so too are outsiders longing to visit and live there, not just pass through to board a ship.

Click here to learn more about the Neighborhoods of Athens.