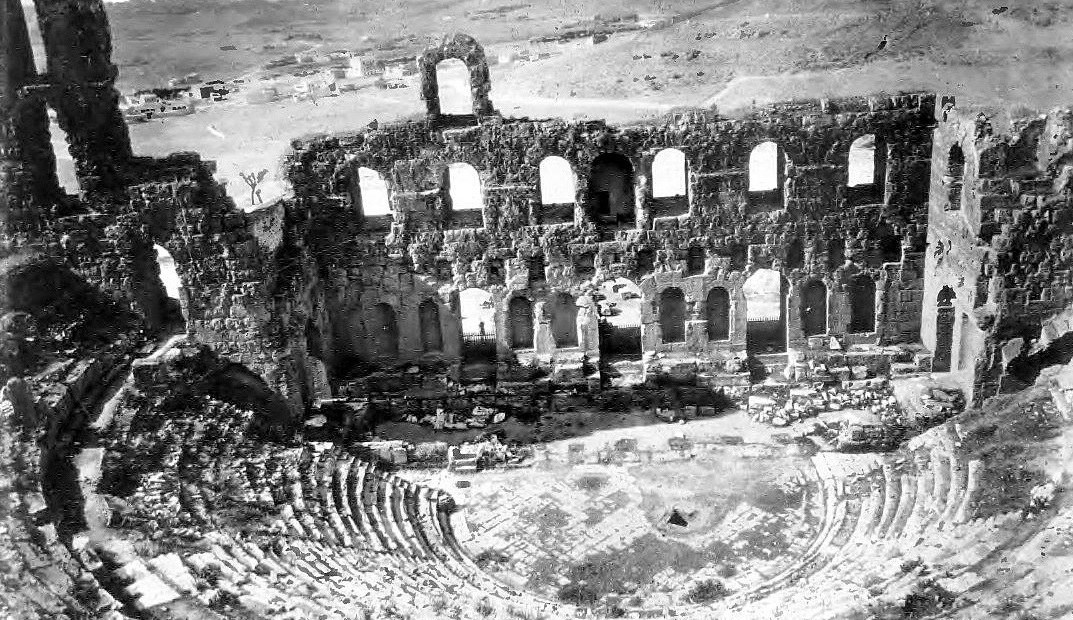 Days of Future Past “Odeon of Herodes Atticus” (Part 12)

This week marks 12th and the last article of the MI4 Real Estate ‘Days of Future Past’ Blog Series, hence we have chosen to present a building that most Athenians and visitors alike value deeply, the Odeon of Herodes Atticus. The Odeon is pictured in the mid-19th century and in the present day. The transformation of the ancient site as well as the surrounding area is indeed remarkable.

The Odeon of Herodes Atticus is actually a theatre structure made by stone. It is located on the southwest slope of the Acropolis of Athens in Greece. The building was initially built in 161 AD by the Athenian Herodes Atticus in memory of his wife, Aspasia Annia Regilla. Originally a steep-sloped theatre with a three-storey stone front wall, it had a wooden roof made of expensive cedar of Lebanon timber. It was intact until it was destroyed and left in ruins by the Heruli in 267 AD. It was renovated again in 1950 with the audience stands and the orchestra (stage) restored using the classic choice of Pentelic marble (sourced in Mt Penteli) as done in antiquity. Since then it has been the main venue of the Athens Festival, which runs from May through October each year, featuring a variety of acclaimed Greek as well as international performances.

The areas surrounding the Odeon of Herodes Atticus, namely Koukaki, Filopappou Hill, Plaka, Thiseion and Monastiraki are all located just below the Athenian Acropolis and are currently seeing a tremendous rise in property investor interest, and value. It is therefore of paramount importance to secure an investment in the area while prices are still competitive.

Contact us now, whether you would like to make a solid investment anywhere in Greece or its capital Athens, both some of the most beautiful and highly esteemed holiday destinations in the world, or you are seeking to secure Greek/EU residency status through the Greek Golden Visa program. One can obtain the residency by investing a minimum of 250,000€ on property (or properties) anywhere in Greece.